For 2011, a refreshing edition in the traditional four leg format with a decidedly northern course between 46th and 53rd parallels north. 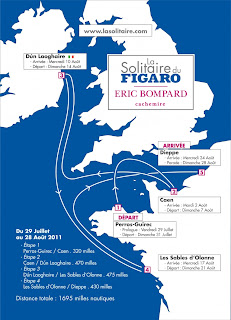 It is back to basics in the start of this edition of La Solitaire du Figaro as Perros-Guirec and the Brittany Region will inaugurate the celebrations on Sunday 31st July. Faithful supporter of the race, Perros-Guirec harbour holds the record for highest number of participations and will be welcoming the popular single-handed event for the 16th time this year. The race last visited the Côte d’Armor town in 2005 and Perros-Guirec is preparing to put everything in place to receive the competitors in style.

Caen will be the second French town that will play host port this year. This major town in the Lower-Normandy region will welcome the La Solitaire du Figaro for the third time. The harbour and the race village, ideally nestled right in the centre of town, will play host for one week to the thousands of visitors curious to meet the skippers and enjoy the varied entertainment offered by the active town council.

Ireland is to be the only non-French stop-over on the new course with Dún Laoghaire as destination for first time. The magnificent harbour, at only a few minutes from Dublin town centre, is wholeheartedly preparing to welcome the single-handed sailors at the end of the 3rd leg. This is a new stop-over and will not doubt be a new discovery for the skippers, who will appreciate the charm of a finish in the superb bay of Dublin and the warm welcome at the National Yacht Club.

The fourth meeting point on the 2011 course will be Les Sables d’Olonne in the Vendée. In 2007, the Vendée harbour celebrated the victory of Michel Desjoyeaux, and ever since then Conseil Generale and town have continually evolved in synch with yachting, continually welcoming sailors from all over the world, notably the Vendée Globe skippers. The Vendée population who is fully involved with the Vendée Globe, have prepared a wonderful welcome for La Solitaire du Figaro this summer. Start town, stop-over or finish town, it will be the 6th time that the event visits Les Sables d’Olonne.

Finally, the town of Dieppe will close La Solitaire du Figaro 2011. The expected finish is to take place in Higher-Normandy region around the 24th of August. The town and the race first came together in 2009 on what proved to be a very successful and popular stop over. The people of Dieppe will welcome the skippers on the final run and shall have a fine celebration prepared, the climax of which will be the now traditional closing parade on Sunday 28th of August.

Perros-Guirec, Caen, Dún Laoghaire, Les Sables-d’Olonne and Dieppe: five towns for a 42nd edition resolutely marked by novelty and innovation. Between the English Channel, the Atlantic, the Celtic Sea, and the Irish Sea, La Solitaire du Figaro 2011 promises to be one of the most important sporting events of the year.
fonte: http://www.lasolitaire.com/
Pubblicato da Faventibus Ventis a 21:50 Nessun commento:

Ian Williams and Francesco Bruni both run aground at the Portimao Portug...