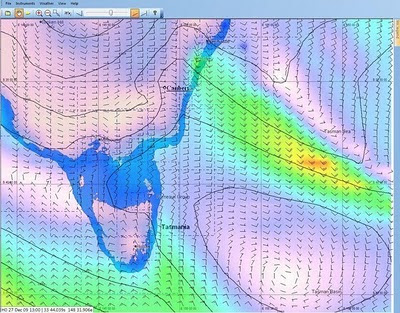 The two models are reasonably similar for the majority of the yacht race however they are forecasting differences in wind speed and direction for the start of the race in Sydney, that could result in two very different outcomes. The question now is, will we see a southerly start with 22 knot winds OR will we see a south easterly start with 13 knot winds? Time can only tell.

Saturday is expected to be overcast with rain throughout the day. With potential rain squalls around start time.

As the faster boats travel south along the NSW coastline they should see the breeze shift towards the northeast around nightfall. In the early hours of Sunday morning the majority of the fleet should be propelled south, picking up speed as the northeaster increases to around 15-20 knots.

The wind is expected to decrease through the day before shifting more northerly around 0100hrs on Monday morning, when light 5-10 knots winds are expected. As the leaders close in on Bass Straight they can expect westerly winds that will increase as they travel south. Westerly winds are forecast in the straight increasing throughout the day up to 30 knots on Monday. As the westerly winds bend around Tasmania they are likely to shift to a west-northwest.

PredictWind's CMC model follows the same trends but should see the southerly wind expected at the start line shift to the southeast a few hours after the race start. The southeaster is expected to decrease from 20 knots to 10 knots by 1300hrs on Sunday.

As the fleet sails south along the NSW coast a 10 knot easterly wind is expected for Sunday afternoon.

The Race leaders are likely to feel the wind increase to 15 knots and shift towards the northeast later on Sunday depending on their locations.

Monday shows westerly winds around 30-35 knots at the southern tip of Tasmania and 25-30 knots around Bass Straight which should make things interesting if any of the fleet are in that area at the time.